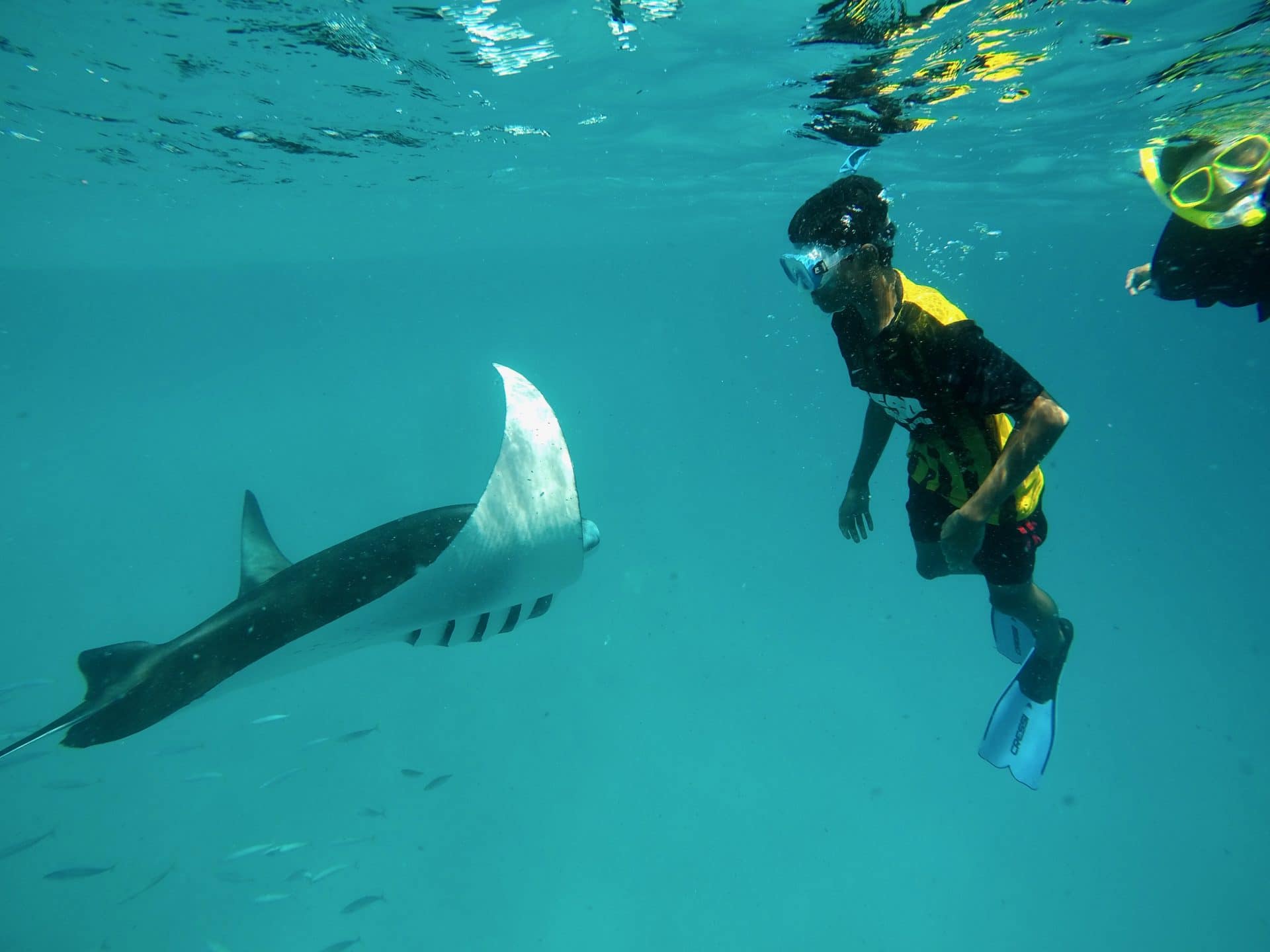 Despite unfavourable weather which affected snorkelling-based activities, students were able to engage in a wide range of educational events at the school. Saturday 21st September saw the students getting involved in a waste segregation session for World Coastal Clean-up Day, hosted by BAEC, Soneva Fushi, Parley and Manta Trust. Students from thirteen islands bought jumbo bags of beach clean-up waste to the event and engaged in a hands-on session to learn how to properly separate recyclables.

In the month leading up to the festival, 200 students of ten schools from Baa and Raa Atoll were taken snorkelling with manta rays by partner resorts and the Biosphere Reserve team. Students spent an hour inside the World-renowned Hanifaru Bay, snorkelling with up to fifty of these gentle giants. The trips built on the event’s aim to inspire young Maldivians to become ocean advocates and engage more with water-based activities, featuring snorkelling equipment funded by donations from last year’s festival.

For Ifaasha Abdul Raheem, the festivals school coordinator, the experience was memorable:

“This has been one the best experiences in my life! Manta festival has not only boosted my love towards nature, but it also has made me a better person in every possible way. This festival has brought an immense impact to our youth to fall in love with our environment and made them realise the crucial role they can play in their community! Most importantly, this was an opportunity for our students to explore, learn and a golden chance to show their creativity and love towards nature. I loved every bit of it! Glad to be part of this amazing event.”

The festival concluded with an energetic prize giving ceremony and an air of anticipation and excitement for the next event.

Check out the Baa Atoll Manta Festival Facebook page at www.facebook.com/BaaMantaFest or find out more about manta ray conservation at www.mantatrust.org.

Jim & Cary Yanny’s Guide to Diving in the Maldives: Part 6 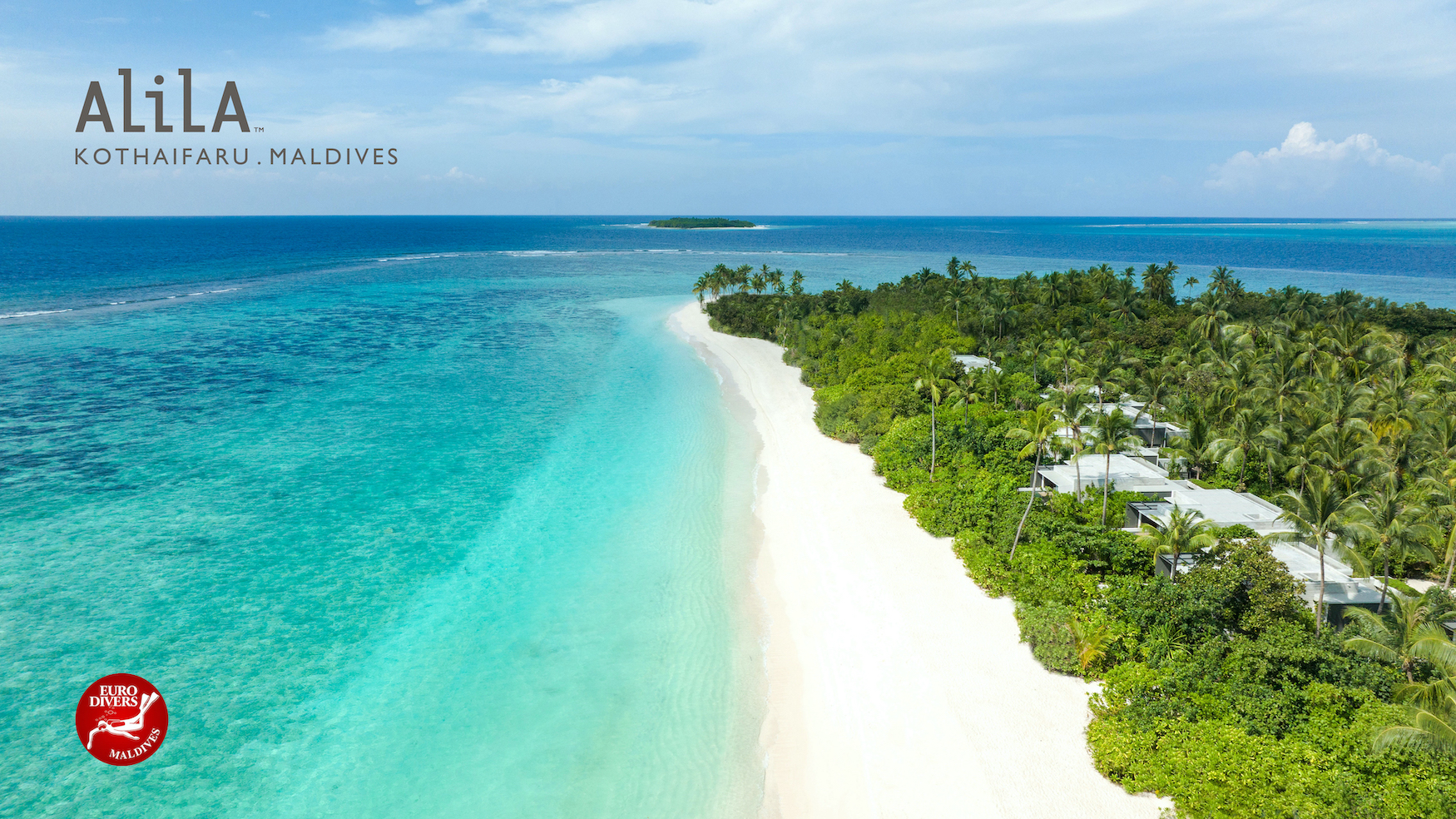 In celebration of Euro-Divers’ 50 Years of Diving with Friends in the Maldives, the team have opened a new PADI 5 Star Dive Center at Alila Kothaifaru Maldives.

Alila Kothaifaru Maldives retreat lies at the northern edge of the Maldives in the tranquil Raa Atoll, reached via a panoramic 45-minute seaplane voyage from Male. The island has 80 all-pool-villas, 36 of which are over water with a private pool for your enjoyment and 44 beachfront villas designed seamlessly to immerse guests in the natural surroundings. In support of sustainable tourism, Alila hotels adopt Earth Check operating standards, integrating their environments’ natural, physical, and cultural elements.

Raa Atoll is well-known for the excellent scuba diving it offers. The underwater landscape of Raa Atoll is characterized by a high number of thilas scattered inside the lagoons. These underwater coral mountains are magnets for marine life including huge schools of tropical reef fish, a generous splash of colour, iconic bucket-list-must-see marine creatures including sharks, mantas (appearing during the entire year), turtles, and uncrowded dive sites—a perfect diver’s heaven for beginners and experienced divers. We offer a full range of PADI courses for different levels. From November till March, the Manta cleaning station is located 15 minutes away by boat.

The team from Alila Kothaifaru Maldives look forward to welcoming you soon.

Find out more at: www.euro-divers.com/alila-kothaifaru-maldives 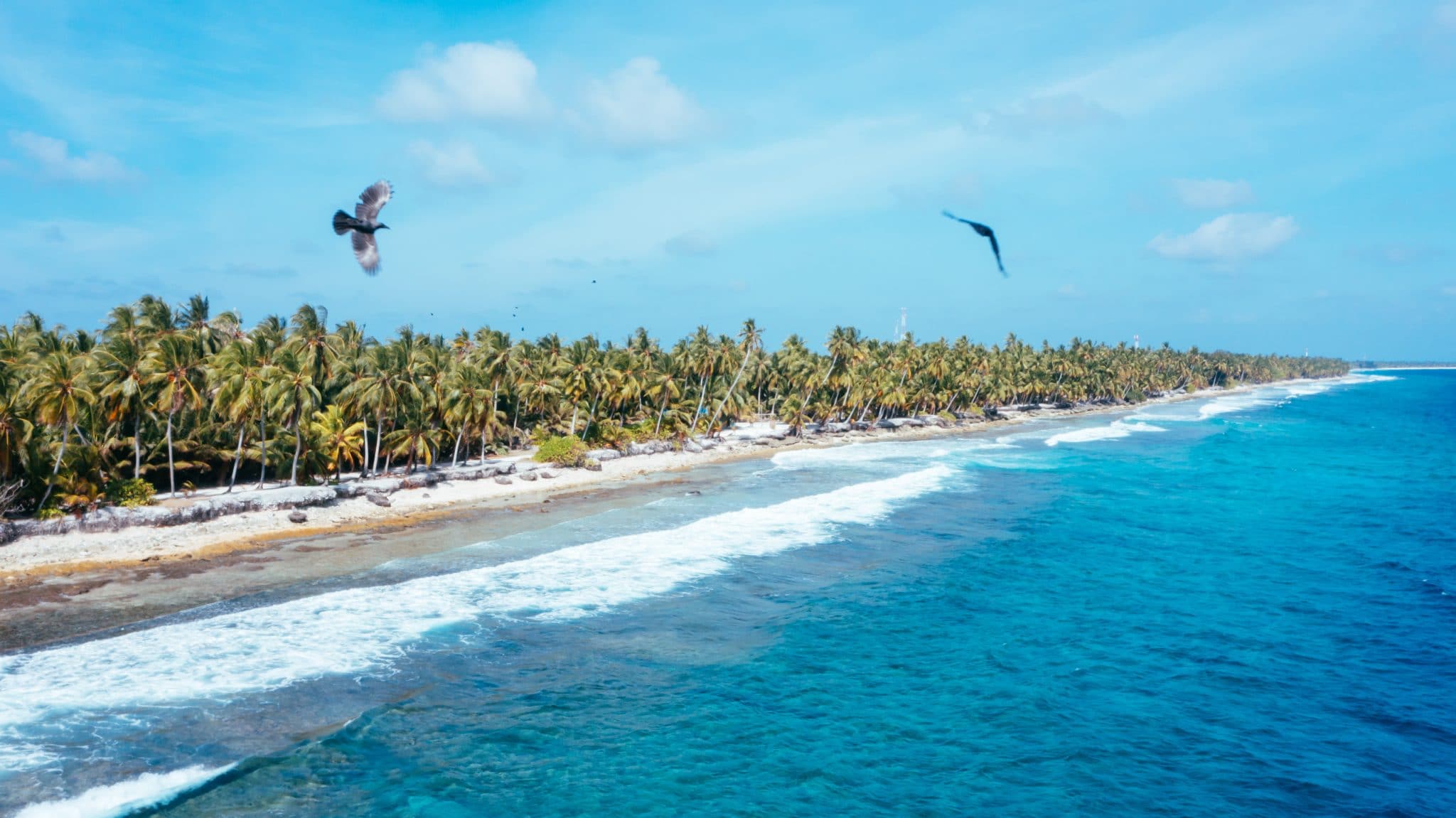 With countries opening their borders after almost two years of lockdown it was time to head to a destination which we had high on our list for a few years which was the Maldives. Whilst planning the trip we wanted to make sure we got to experience the Maldives, from its local islands to one of the many resorts that can be found around the archipelago. Whilst also ticking off the many shark and ray species that can be seen.

There was one island in particular that we wanted to visit, an island that’s become more and more popular over the last couple of years and that is the incredible island of Fuvamlulah. However, it wasn’t long after arriving into the Maldives that we realised that the bag that had the underwater housing and some dive kit hadn’t got on the flight in Dubai. Not the start we had expected but we weren’t going to let this ruin the incredible trip that we had planned.

Situated in the deep south of the archipelago, skipping over the equator is Fuvamulah Island,  an hour and a half flight from Male airport. The island offers one of the most unique shark encounters in the Maldives: diving with Tiger Sharks. The number of Tiger Sharks found around Fuvamulah has made the island an ever increasing important area for these sharks. Around the island the water drops off to hundreds of meters, where the water can upwell from the depths bringing cold nutrient rich water to the surface. This provides for even more exciting encounters that can occur within the blue and around the plateau cleaning station with species such as Thresher Sharks, Great and Scalloped Hammerheads, Oceanic Mantas and Whale Sharks. Tiger Sharks are guaranteed at the island, whether they are seen out in the blue or at the famous ‘Tiger Zoo’ which is located at the mouth of the harbour.

We booked our diving and accommodation with Fuvamulah Dive School, as part of the ‘one day look‘ package. As part of the package, they organise the flights, transportation whilst on the island and a place to stay at the Fuvamulah Inn which is only a 5 min journey to the dive centre situated at the island’s harbour.

We had two days diving booked where there were three dives a day which included a dive at ‘Tiger Zoo’ each day. This dive was planned for the end of the day as the  sharks follow the fishers out when they head out in the morning and then follow them back where they then stay around for the offcuts.

Heading out on the first day of diving we went out to the plateau to take a look at the cleaning station in case any Threshers were around as well as the possibility of some pelagics. Jumping into the 29 degree water was definitely a change from the colder waters off the Welsh coast and the visibility was incredible. We headed down, taking the time to keep an eye out for any shadows in the blue, before reaching the plateau. A few small White-tip Reef Sharks were seen patrolling the ledges along with a large female Tiger Shark cruising below in the depths. After 40mins and no sign of Threshers it was time to head back, where the 6m safety stop was accompanied by another large female Tiger but sadly no pelagics.

Following a surface interval we then headed to the next site, just a short steam out of the harbour to where the beach drops off to depth creating an almost wall-like dive. The dive provided plenty of coral including some huge fan coral at the deeper depths. The large amount of coral also provides for some encounters with Hawksbill Turtles.

For the last dive of the day we went to the famous Tiger Zoo. Swimming over to the shallow ledge, we set up in a line whilst the dive school divers hid fish offcuts around the site to bring in the Tiger Sharks. In position, holding on as there was a swell running, we saw a glimpse of the the first Tiger Shark emerging from the distance. The Tigers found in the area are mainly large female sharks, growing over 4m in length and in some cases over 5m. As they came close it was incredible to look at these amazing Apex predators in their eyes and how graceful they glide past. In total, five sharks appeared, providing some close up encounters. During the second day and another visit at Tiger Zoo, a total of seven sharks were encountered, all providing the same close up curious experience. During the the dives the Fuvamulah Dive school team were incredibly professional and ensured that the dives were carried out in a safe and enjoyable manner.

Surfacing after Tiger Zoo saw the end of the two days diving at Fuvamulah – two incredible and unforgettable days of diving where encounters in the blue alongside those at Tiger Zoo will never be forgotten. It’s a diving location that’s definitely recommended but also a spot that should be continuously monitored to better understand the population of the many species that are found around the island. Fuvamulah surely is the ‘Island of Sharks’.

A 2am start beckoned for the beginning of our next journey, a flight back north to Male airport to then head to Dhigurah for a few days to explore another local island, this time on the lookout for Whale Sharks. Whilst also continuing to hope that our missing suitcase would finally arrive with us.

All the latest news from the world of scuba diving and marine conservation direct to your inbox. Subscribe to the free Scubaverse email newsletter for news, features, competitions, special offers and more!.

Diving holidays in The Maldives

Opposition to the lifting of the Maldives Shark Fishing Ban grows